Our 2017 Festival of Cycling gets record number or riders…

Yesterday, (Sunday 2nd April) riders of our annual Festival of Cycling event enjoyed blue skies and a scenic route whilst raising a record-breaking amount for charity.

Our 2017 event was the third annual Festival of Cycling. We watched the number of riders and money raised for charity surpass figures from previous years. The Festival of Cycling, sponsored by NFU Mutual Market Harborough, raised an estimated total of £2000 and attracted 400 riders, over 100 more than last year.

What there was to offer

The event had three routes for riders: the 50km, 100km and a new 100-mile route. All of the proceeds from the three cycling routes went to support local charity Adam’Smile and Cyclists Fighting Cancer. Many other cyclists had organised individual sponsorships for their own charities.

As well as providing a route for more experienced cyclists, we offered facilities for the next generation of cyclists with child’s cycling classes. Children aged between 4 and 12 took part in the coaching and raised funds for Whizz Kids, a local young person’s cycling club.

The riders gathered at Robert Smyth Academy from 7:00am onwards and, following registration and briefing, began their varying routes around the Leicestershire and Northamptonshire countryside. Waiting for riders at the finishing line were hot meals provided by Waterloo Cottage Farm, hydration support from Nuun and Clif Nutrition and a free massage from The Training Shed.

What was said about this year’s Festival of Cycling… 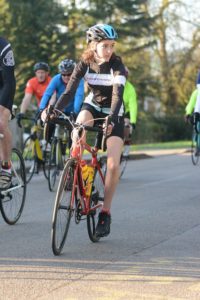 “The event is growing year on year. It’s great because this means that more and more people are enjoying the beautiful countryside around Market Harborough in the company of their friends. As well as raising money for worthwhile causes.” comments Brian Corcoran, event organiser for Race Harborough. “The introduction of the 100 mile route this year brought some more experienced riders but this is a cycling festival and we will always welcome a wide span of abilities.”

“We are grateful to have had support from a range of local businesses. It was a real community effort and without the help of businesses, wardens and riders, we wouldn’t have been able to make the event as successful as it has been,” explains Brian.

“This was a fab event! Brilliantly organised, really well marked out, and everyone at feed stops were very friendly! Will definitely be back next year,” comments Louise Brown who took part this year for the first time.

As with previous events, The Adam’s Smile charity is one of the central beneficiaries. The organisation has spent the past 10 years raising money and awareness of building a safe cycleway and path between Lubenham and Market Harborough.  They have recently had their hopes of progress raised through work with Leicestershire County Council in respect of formalising a public access route and in conjunction with the Market Harborough transport Strategy consultation.