May 8, 2017 | Carnival of Running, Harborough Half Marathon, Race Harborough, Relay

The third annual Carnival of Running is returning to Harborough this June with more entries than ever recorded at this stage.

The Carnival of Running, sponsored by Market Harborough Building Society, is being held on Saturday 10th June, to coincide with the Harborough Carnival. The combination of events draws thousands of visitors to the town, meaning that runners benefit from large crowds to cheer them over the line.

We organise four running events on the day: a one-mile fun run, 10km, half marathon and the relay challenge (which breaks the half marathon into 4 x 3 mile sections) and is sponsored by Edward Hands & Lewis. All of the races begin at Robert Smyth Academy and the fun run will take places at 11am, one hour before the rest.

What makes this Half Marathon so popular? 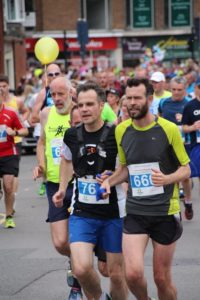 “Perhaps it was caused by the London marathon, but we’ve seen a big jump in entries over the past week or so” explains Brian Corcoran. “We have had around 20% more entries than ever before at this stage and it’s likely that the run will sell-out before the closing date.” Over 300 have already registered for the half marathon, while 250 have signed up for the 10k race. This leaves less than a third of the places currently available.

“The 10k and half marathon runs incorporate both the busy festival atmosphere of the town centre and the beautiful nearby scenic Leicestershire countryside. Perhaps that is what makes the race so popular. Certainly a lot of people who ran last year have decided to take part again. As most runners know, having a cheering crowd around you can make all the difference in getting you over the line that bit quicker. There’ll certainly be a big crowd to greet runners at the start and end of the race” adds Brian.

Once over the finish line, runners receive a free massage courtesy of The Training Shed. Also included in the entry fee is a medal, t-shirt, photos and a chance to win prizes, including cash winnings for the top three male and female runners.

Entries for all of the races close at midnight on June 6th. The price of entry for the 10k is £20, the half marathon is £25 and the relay, which includes four runners is £100. Proceeds from each entry fee go to Squires Effect, the event’s charity of choice. Entry to the Fun Run is £2, all of which goes to Home-Start South Leicestershire, a family support charity. Click Enter now to confirm your place.

The Carnival of Running has now become the single largest charity fundraising event in the town.  In the event’s induction year approximately £25,000 was raised, while in 2016 this rose to an estimated £30,000.

Such is the scale of the event, runners from far afield regularly attend and stay in the town for the weekend to enjoy the carnival. The Angel Hotel has agreed a partnership with Race Harborough to offer those running in the race a discount on accommodation at their hotel over the weekend.