Over 200 people took to the streets for our first ‘Festival of Cycling’ event sponsored by Alden Electrical this Sunday. We’d hoped that the event would offer something for everybody, but it proved to be a test of character as well as a test of endurance.

The weather forecast from Saturday night couldn’t have been worse with gusts of 80 mph and torrential rain forecast for the following morning.  Conditions weren’t quite as bad as this but weren’t ideal either, especially for some of the family friendly fun that had been planned.

The bad weather resulted in a slightly reduced number of people taking part with about 40 people pulling out on the morning of the event. However, 100 participants took part in the 100km route and 65 participants in the 50km route. Participants came from across Leicestershire & Northamptonshire and included former England rugby captain Martin Johnson.

All routes started at Robert Smyth Academy and went round local villages including Great Bowden, Foxton, Medbourne, Kibworth and Mowsley before returning back to Market Harborough.

Both the adults events were ‘sportives’ so there is not a winner as such because of the way they are structured, given the conditions, everybody who completed the distance is a winner in my view.

Other activities at the Robert Smyth race HQ included 25 free coaching sessions on cycling from Dean Barnett of Whizz Kids.  The event also included a prize-laden family trail that was run by Sustainable Harborough.

We’d like to pay tributes to the ten volunteers who also had to brave the weather and supported the riders along the way – without them, the event couldn’t have taken place. The AdamSmile team at Lubenham village hall welcomed the wet and cold cyclists in with a hot cuppa and their homemade flapjack went down a treat! Businesses from the local area were just as generous, with articles donated from local clothing store ‘The White Stuff’ being handed out in a goody bag at the finish line.

Many of the participants took to Facebook after the event, including cyclist James Stretton who commented: “Thoroughly enjoyed today, especially the last half the 100 with the wind finally behind us. Looking forward to next year, when hopefully the weather will be better.  My thanks goes out to all the marshals and volunteers that helped support the event”.

In total the event raised over £1,200 for local charity AdamSmile.  We’re full of admiration for everyone who battled through the elements and hope that you all enjoyed it despite the weather! Our next event will be the Carnival of Running, taking place on June 13th (Carnival day), which will include the first half marathon in Market Harborough for over 3 decades. 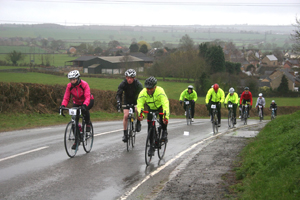