Carnival of Running 2017 – Sees streets of Harborough flooded by runners

The third Harborough Carnival of Running which took place on Saturday 10th June saw a large rise in the numbers of runners taking part.

Almost 1000 people competed at the different distances which make up the Carnival of Running, including the half marathon. Following the first year of rain and a second year of blistering heat, this year’s event was a much more comfortable affair with overcast skies and moderate temperatures.

Once again Market Harborough Building Society were headline sponsors of the event, collaborating with The Training Shed who sponsored the t-shirts and provided valuable post-race support.

The event comprised of a half marathon, a 10k race, a relay race and a children’s one mile event.  Using the route of the carnival parade for the first three miles of the course ensured a supportive crowd of around 5,000 to cheer on the runners.

After going through the town centre, half marathon runners went out into the surrounding countryside taking in Welham and Thorpe Langton before ending by the carnival grounds. Relay runners were taken and dropped off by Murphy’s taxis for the 3rd time. 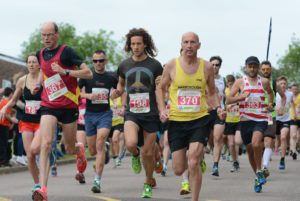 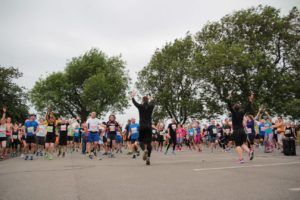 Local charities were also big winners on the day with an estimated £30,000 already collected in sponsorship with more expected to come in. The Squires Effect will be receiving a cheque for £2,000 from Race Harborough.

Race Harborough had a range of positive comments posted on the ‘Race Harborough Carnival of Running’ Facebook page. Lottie Harris commented: “Absolutely exhausted after all those hills, but had a great day. Made some awesome friends too.”

Rhiannon Stafford said: “This was a great event. Really well organised and very friendly. My first half marathon and I’ll be back next year!”

Fi Fretter commented: “Thank you for a fantastic event, great organisation, water stations were perfect and the support on route was fab. Special thanks to all of the amazing marshals, made a blooming difficult run fun!”

The event organisers Race Harborough, led by Brian Corcoran and Kenny Anderson, were pleased by the smooth running and popularity of the event. “We were delighted by the number of runners as well as the enthusiasm of the crowds who came out along the route to cheer them on,” comments Brian.  “It’s great to see the event going from strength to strength and we were really pleased to be able to hand over such a sizable cheque to the Squires Effect.”

More pictures and details of the event are at www.mickhall-photos.com .The next event organised by Race Harborough will be the Lutterworth Charity 5 Mile run.