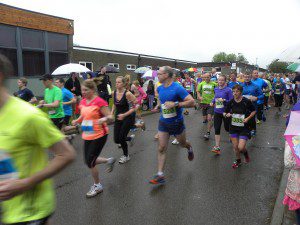 Market Harborough’s streets witnessed a new spectacle this Saturday as 500 runners took part in the town’s first Harborough Half Marathon.

Around seven thousand spectators lined the town’s streets to see the runners complete the half marathon & 10k event. Some had come to cheer on family and friends, whilst others were there to enjoy the carnival floats which came past shortly afterwards.

The race was officially started by Great British Bake Off winner Frances Quinn – who then joined the crowd and completed the half marathon. Runners started at Robert Smyth Academy, then went through the town centre where the roads were lined with cheering crowds. The central portion of the half marathon consisted of country lanes and a quick tour of villages including Welham and Thorpe Langton before ending by the carnival grounds.

Feedback for the event from runners on social media was swift and positive – universally praising the course, the marshals and the route.  Even the day’s ongoing drizzle failed to dampen the enthusiasm for the run which was more of a problem for organisers than for the runners.

Over £17,000 was raised for a variety of causes, including The Squires Effect, Fight for Sight and Guide Dogs, Cransleigh Hospice, Derbyshire, Leicestershire and Rutland Air Ambulance, British Heart Foundation, CCLG, and Leukaemia and Lymphoma Research.

The event has been several years in the planning with a number of routes and dates considered before the collaboration with the town’s long standing carnival was decided as the best option. Runners between the ages of 15 and 82 competed, with runners travelling from Sussex, Forest of Dean and Felixstowe, as well as closer to home to participate.

The event organisers Race Harborough, led by Brian Corcoran and Amy Kingston, were delighted by the numbers taking part and the positive feedback. “We couldn’t have been happier with how well it went and the fantastic support from the crowds, sponsors and marshals that helped to make it such a good day for the runners” comments Brian. “We are already planning ways to make next year’s event even bigger and better.”

Laurence Wicks and Rosanna Andrews (Northampton Road Runners) took first place in their respective categories in the Half Marathon, whilst Matt Driver and Karen Brooks, both of Harborough Athletics Club, pushed past the competition in the 10k race. PSC Fire Safety took first place in The Ideal Marketing Company Corporate Relay Challenge.