Plans have just been unveiled for a new triathlon that will be based in Market Harborough on the afternoon of Sunday September 7th.

The Archway House Harborough Triathlon will comprise 2 events – a ‘Try and Tri’ event for people who want to find out what a triathlon might be a like and a ‘sprint’ event for those who are more confident in their swimming, cycling and running abilities.  For both events there is also a relay option – where entrants can split the sports declines between 3 people so that one person runs, one cycles and the other sprints. 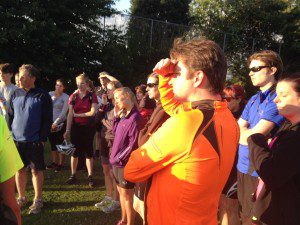 The event is the idea of Amy Handford and Brian Corcoran, both keen triathletes who live in the area and have long dreamed of bringing the event to the town. “We are so excited to see the event coming together and hope that lots of people might use it as an opportunity to try out a triathlon for the first time” says Amy.

The Archway House Harborough triathlon will be based on the site of the Harborough Leisure Centre where the swim sessions will take place. It is hoped up to 300 people will take part at the event from 2pm onwards on September 7th.

In addition Archway House, the events main sponsor will be running special sports massage and stretching classes for participants. “We are delighted to be supporting this event and hope that lots of people locally will use it as a way of getting active and perhaps trying out a triathlon for the first time” comments Archway House owner Alec Welton. Full details of the event are on www.archwayhouse.co.uk.

The triathlon movement has caught the imagination of the British public, helped by the 2012 British Olympic champions Alistair and Jonathan Brownlee, who won gold and bronze medals respectively.  Even before boost to the sport from the Brownlee brothers membership of British Triathlon grew by over 50% between 2007 and 2011.

Archway House is the largest centre for complementary therapies in the area, offering a range of services including acupuncture, chiropractic and sports massage.