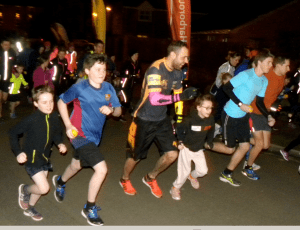 It was the town’s first Pancake mile and seems to have been a success with participants from the Harborough area.

For the first time, families from Market Harborough spent the evening of Shrove Tuesday dashing through the town centre. The Pancake Mile was a new event organised by Race Harborough and sponsored by Gallones Ice Cream, which also provided the race HQ at the start and finish of the run.

A total of 80 residents registered for the event – the youngest was just 2 years old and the eldest was 70. Many entrants were also assisted by younger children in prams and pushchairs, making the event a particularly family friendly affair.

“We certainly had all different ages and standards taking place” commented Race Director Amy Kingston. “Some participants did bring along their own frying pan to flip pancakes along the way, but most focused on the running – and then enjoyed a pancake at Gallones at the end” she adds.

Madi Brooks was one of those taking place at the event along with a team of her supporters who were helping to raise money and awareness of her cause.  Madi suffers from congenital myasthenia gravis, which means she has weak muscles, fatigue and has difficulty when breathing. It is a condition only affecting 15 people in every 100,000 in the UK.

The distance of a 1 mile race was for a long time a favourite in athletics, most famously when Rodger Bannister defied expectation in 1954 to run it in under 4 minutes. None of the entrants from the pancake mile came near to troubling Banister’s record, but then it’s hard to challenge the record books carrying a lemon and a frying pan.

“It was great to see so many families take part and turn the evening into such a fun event” comments Morven Moss from Gallones. “We were delighted to support the event and provide the pancakes at the end for all the finishers.”

The Pancake Mile is the latest in a long line of events created by Race Harborough. In the past two years they have launched the Harborough Triathlon, Santa Run, Tunnel Vision Night Run, and the Harborough Carnival Half Marathon and 10K. Their next event is the Festival of Cycling taking place on Sunday April 3rd. It is a 50km and 100km sportive which is returning after its debut last year.