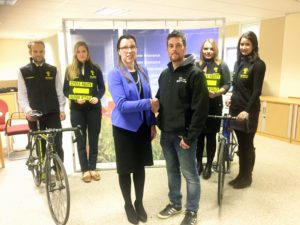 Our event which is now sponsored by NFU Mutual Market Harborough celebrates cycling and promotes its benefits with experienced and beginner riders. In addition to the kid’s coaching sessions, the 50km and the 100km options that have been available in previous years. For 2017, there is a new 100 mile route.

Beginning on the grounds of Robert Smyth Academy, the routes take riders out into the Leicestershire and Northamptonshire countryside. Entry fees are £4 for the kids coaching, £20 for the 50km and 100km options and £25 for the 100 mile route. The entry fee includes a medal, a choice of hot meals provided by Waterloo Cottage Farm, hydration support from Nuun and Clif Nutrition and a free massage.

On Sunday 19th March at 8:30am, there will be a free social ride to from the Robert Smyth Academy. This is for riders of all abilities to practice the 50km route.

“We are really excited that the Festival of Cycling will be returning for a third year and it will be bigger and better than ever”. comments Brian Corcoran from Race Harborough. “The event attracted great feedback from participants about the course and including the new 100 mile option will broaden the appeal for club cyclists.”

Welland Valley Couching Club will be delivering Go-Ride coaching activities. This is to get young people aged between 4 and 12 years involved in cycling. All proceeds from the coaching will be donated to Whizz Kids. Proceeds from the three cycling routes will go to support local charity Adam’Smile and Cyclists Fighting Cancer.

Register for Festival of Cycling 2017

To find out more, or to register your place click here. Sadly, places are limited and will be allocated on a first come, first served basis. Registration will close around one week before the event. You can browse photos from the 2016 Festival of Cycling to see what’s in store.

We have organised over 20 local sporting events during the past 3 years. These include the Harborough Triathlon, Santa Run, Zombie Run, Tunnel Run and the Harborough Half Marathon & 10k run. Festival of Cycling has remained and proved a popular event for cyclists in Leicestershire area through the years.