Market Harborough’s Santa Run returned to Welland Park on Sunday December 11th and was attended by a record number of runners. Spectators cheered on 580 Santas, the largest amount since the run was formed 3 years ago.

Santas amassed outside Welland Park café from 12pm where there was a race briefing, entertainment from the Ukulele Orchestra of Market Harborough and a warm up routine led by Snap Fitness. Runners then embarked on either a 2km or 5km route around the park.

Organised by Race Harborough, the Santa Run’s main aim is to raise money for local charities. The increase in Santas taking part meant that sponsorship money this year reached new heights. Well over £3,000 was raised for charity with significant amounts going to Squires Effect and Clic Sargeant. 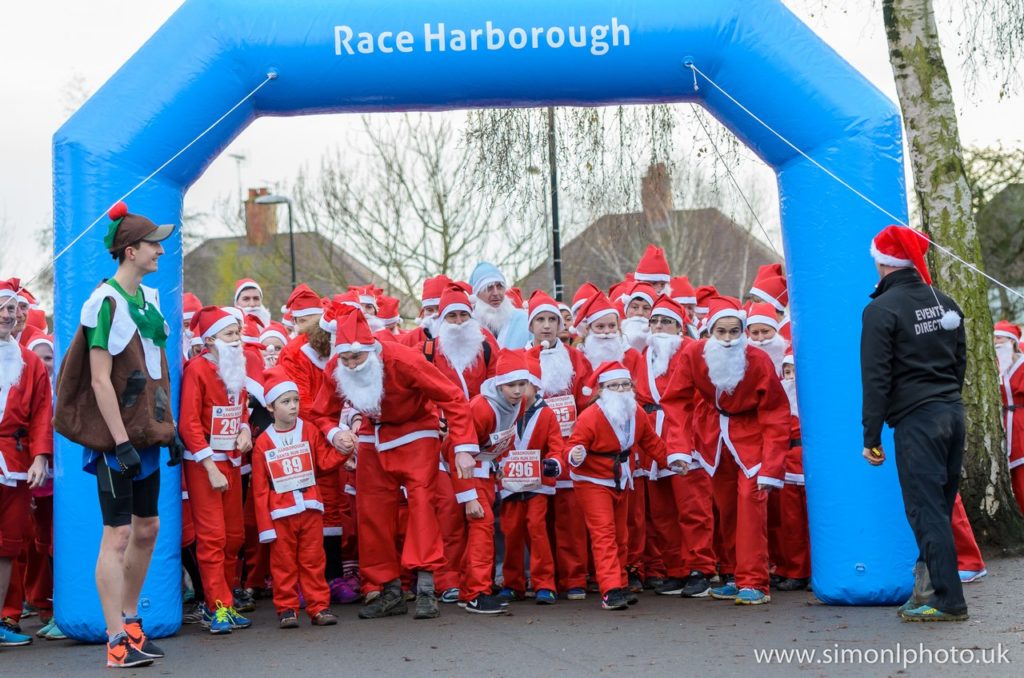 “This event is one that we look forward to and it just keeps getting better and better every year,” comments Brian Corcoran, event co-organiser. “Being based in a town with a strong community spirit means that we’re able to grow and raise good amounts for these worthwhile causes. It’s especially important at this time of year and to see so many people come out to raise money, whether they ran or not, is extremely rewarding for us.”

As an extra fundraising incentive during the run, the Santa that caught the Christmas pudding (Dan Hallam), a runner who set off a few seconds before the rest of the field, would win £100 to donate to a charity of their choice. In previous years the pudding has proved difficult to catch but Sunday’s run saw Jason Williams win the prize. Jason chose to donate the £100 to Vasculitis UK in support of his friend Martin Makin who has been fighting the illness.

Organisers also judged ‘the best dressed dog’ before the race which was won by Jess and her owner Julie Clarke. They received a dog hamper prize donated by Paws 4 Walking.

The fundraising efforts from the run take the total amount raised in 2016 by Race Harborough events to over £35,000. This has been reached through various running and cycling events including the Carnival of Running, Tunnel Vision, Lutterworth 5 and the Festival of Cycling.

“It’s an amount of money that we’re extremely proud of. The money raised goes a long way for the charities that we support and we’d like to thank all those that have taken part in any of our events this year” explains Brian.

This website uses cookies to improve your experience while you navigate through the website. Out of these, the cookies that are categorized as necessary are stored on your browser as they are essential for the working of basic functionalities of the website. We also use third-party cookies that help us analyze and understand how you use this website. These cookies will be stored in your browser only with your consent. You also have the option to opt-out of these cookies. But opting out of some of these cookies may affect your browsing experience.
Necessary Always Enabled

Any cookies that may not be particularly necessary for the website to function and is used specifically to collect user personal data via analytics, ads, other embedded contents are termed as non-necessary cookies. It is mandatory to procure user consent prior to running these cookies on your website.