The weather was kind to participants taking part in the 3rd annual Archway Health Harborough Triathlon. The mild weather with an overcast sky helped participants as they swam, cycled and sprinted across the town from their base at the Harborough Leisure Centre. 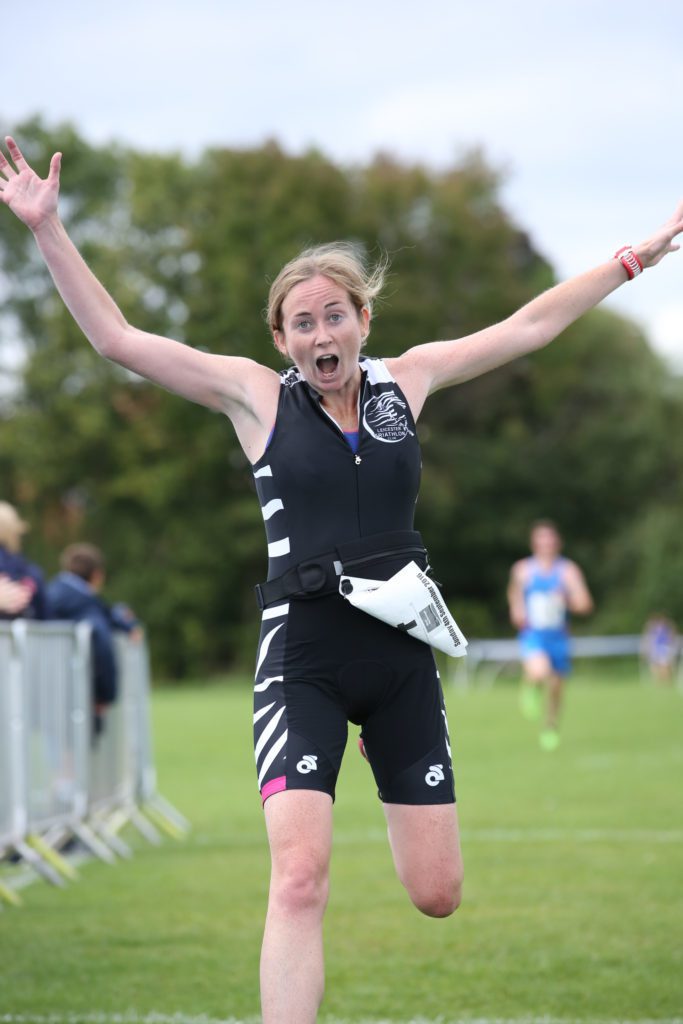 The popular event returned this year with a new longer distance ‘The Bridge; which included a 600m swim, a 34.5k cycle, and 7.5k run. This was in addition to the returning ‘Try a Tri’ and ‘Sprint’ distances.

Finishers were greeted by a crowd of well-wishers and supporters around the finish line. Some lay down on the finish line – exhausted from the physical effort involved. Others looked fresh faced and joked as they received their finisher medal, t-shirt, and cliff bar goodie bags.

In total just under 300 took part in the race on the day.  Carl Shaw and Gemma Royles were the first man and woman past the line for the Sprint distance. The ‘Try a Tri’ title was claimed by Tom Glason and Charlotte Matthews. First man a woman to complete the new Bridge distance were Thomas Greeves and Louise Davies.

The Tri County Cup was won for the first time by The Welland Valley Tri Club. They fielded a team of 40 and local Gemma Royles and Mark Gray won the club championship title.

Alec Welton from event sponsor Archway Health Hub commented “It was great to see so many returning faces, determined to try for a better time. For me what makes the event so special is the volume and diversity of people taking part from all ages and standards. This is not an event that is only for the elite triathlete, it for anybody wanting a new fitness challenge.”

For many, it was the first time they had completed a triathlon. For others, the Harborough triathlon has now started a whole new interest in the sport. Alice Burleigh from Harborough, now studying at The University of Birmingham took part in the first event 3 years ago and how now joined her university triathlon team.

“The Harborough Triathlon has introduced me to the sport and a lot of other people in the town” comments Alice. “It was great to take part again this year”

All the pictures from the race can be viewed here.

The triathlon’s organisers Brian Corcoran and Amy Kingston from Race Harborough will be launching a new event next month themed around Halloween. The ‘Zombie Run’ is taking place on October 30th. It will be a 4 mile run where competitors will be pursued by zombies based around Robert Smyth Academy. “There has been nothing like it in the own before and we are hoping it will appeal to runners of all levels with a since of fun”.