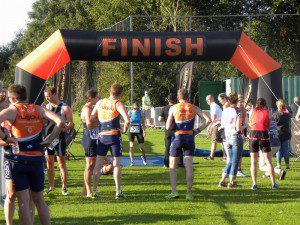 Participants, sponsors and council leaders have praised Sunday’s Archway Health Harborough Triathlon and the 300 competitors who completed the event. The triathlon saw entrants swimming, cycling and running across the town from its base at the Harborough Leisure Centre.

The event, which for the second year running had blue skies and sunny weather, saw many returning athletes who had taken part in the inaugural 2014 event. Some were aiming for a faster time, whilst others took on the challenge of completing a longer distance.

Finishers were greeted by Councillor Michael Rook who was one of a team of people presenting medals. “It was great to see so many people participating enthusiastically in what is clearly a very physically challenging event. There was a great spirit of friendly competition amongst the competitors,” he commented.

The Tri County Cup was won by The Rugby Triathlon Club who fielded a number of members in the event and this year relay event was won by ‘Bar Ram Ewe.’

Alec Welton, owner of Archway Health, the event’s sponsor says: “We watched some of the participants in awe from our stand. There were clearly some very fit and dedicated athletes, but what made the event so special was the volume and diversity of people taking part – from all ages and of all standards. This is not an elitist event; it is for anybody seeking a personal physical challenge.” As well as Archway Heath, many other local businesses got involved from donating prizes to lending staff to help marshalling the event. Without the support of so many Harborough people and companies and event of this size would not have been possible.

Positive feedback from entrants was shared extensively on Facebook and Twitter following the race. Competitor Lianne Edwards from Market Harborough said: “Fantastic, well organised and ultra helpful. Well done to all the organisers, marshals, supporters and competitors. Also full of praise for the event was Kenny Anderson, completing his first triathlon, who commented: “Really enjoyed myself today. Very well organised and the marshals were fab, competitors very supportive with each other and great weather.”

The triathlon’s organisers Brian Corcoran and Amy Kingston from Race Harborough have launched a number of sporting events over the past 12 months including the town’s first Santa Run and 100km cycling sportive as well as the return of the town’s half marathon on carnival day. All of the inaugural events were sell outs and all are set to return, along with some new events planned for 2016.