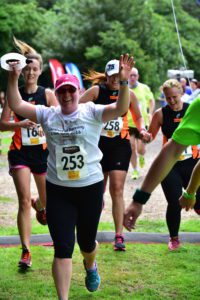 322 runners met at Lutterworth Rugby Club and completed a five-mile route on the country roads from Bitteswell to Ullesthorpe. Sunday presented runners with hot humid weather, but the slight breeze made the run bearable!

The Lutterworth Charity 5 was launched in 2013 by Alan Slater, a local runner from Lutterworth. His aim was to raise money for dementia charities after his father lost a three-year battle with the illness.
For the second year, Race Harborough helped to organise and promote the event, alongside Alan, to ensure continued success and expansion.

As well as the money donated by the race organisers, many runners were directly sponsored for taking part by different charities. The total from this is still coming in but is likely to double the total raised.

The bulk of the money raised is being donated to the East Midlands branch of The Alzheimer’s Society to help those directly affected by the disease.

The race day wouldn’t have been able to happen without them. So thanks to volunteers and event sponsors Powers Flooring, JAW maintenance and Mark Van Allen plastering. They are all local to Lutterworth. A great day of running but very warm. Good spread of ability across the runners.

Next up? The Harborough Triathlon

The Harborough Triathlon will take place on Sunday 3rd September 2017 from 1.30pm at the Harborough Leisure Centre. Registrations are now open  for the 2017 event; the triathlon encourages entries from people of all abilities over the age of 15.

For this year’s event, participators will be given the choice of three different distances: ‘Try-a-Tri’, ‘Sprint Distance’ and ‘Bridge’.

If you fancy entering as part of a team, our popular relay option is returning this year. Entrants can enter in a group of three, with family, friends or colleagues to complete the triathlon, making for an enjoyable experience for all.

Race Harborough always promote the fact that competitors can complete the challenge whilst raising money for a charity of their choice.