A popular 5 mile run that takes place each year in Lutterworth is set to return with record numbers expected to compete in the 2017 event.

Only a few weeks after launching the 2017 event, over 250 runners registered for the 5 mile run road race around Lutterworth at 10.30am on Sunday 9th of July. Due to traffic restrictions, the course has a limit of 400 so it is expected that the event will be reach capacity long before the starter whistle blows. 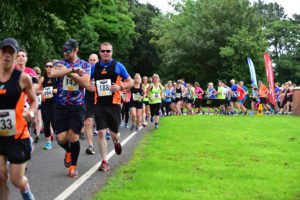 The Lutterworth Charity 5 was started in 2013 by Alan Slater, a local runner from Lutterworth. His aim was to raise money for dementia charities after his father lost a three year battle with the illness. Now, for the second year running, Race Harborough is delighted to be working with Alan to ensure the continued success of the event.

The entry fee is £12, where a portion from each runner’s entry fee will be donated to dementia charities. More details and online entry can be found on the events page.

There will be a training run through of the course for anybody interested in discovering the route. “We know from experience that people like to get a good idea of what a course is like. That way on race day the route it is more familiar. That’s why we thought that we would lay on this extra training event” says Brian. “Everybody of all standards is welcome to join us.”

People can register for free for the training event by contacting info@raceharborough.co.uk

Event organisers Race Harborough are delighted to be involved in the Lutterworth race for the Second time this year. Race Harborough was formed in 2014 to encourage people in the Harborough District to take part in a range of local outdoor activities. Founder Brian Corcoran is now involved in organising 8 events in the area including cycling, triathlon and other running activities.