Market Harborough is to host its first ever Santa Fun Run on 14th December. The event, organised by Race Harborough and sponsored by Snap Fitness, will see 250 runners in Santa costumes descend on Welland Park to raise money for local charity, The Squires Effect. Entries cost just £12 for adults and £6 for under-16s, with Santa costumes included within the entry price. 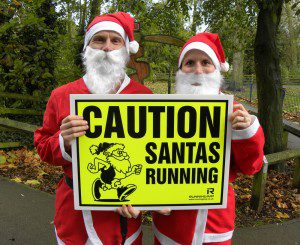 Entrants can run either 5km or 2km, with all finishers receiving a medal.

To add a competitive edge, all runners will be challenged to chase the Christmas pudding – a lone runner in a Christmas pudding costume will set off just before the race begins, and the first Santa to catch up with the pudding will win a £100 donation to a charity of their choice.

The race is the first of its kind in Market Harborough, following the success of Santa Runs all over the country, including Lutterworth and Loughborough.

Race organiser Brian Corcoran hopes to replicate this success: “We’re really excited to bring the Santa Run to Harborough – it’s always a real laugh to see so many Santas of all shapes, sizes and abilities running around. We hope Harborough residents will get behind us, whether that’s by walking with dogs, pushing a pram, or setting their Santa PB, and raise some money for a really worthy cause.”

The Santa Fun Run will start from Welland Park Café at 2pm on Sunday 14th December.  Places are limited and will be allocated on a first come, first served basis, and registration will close at midnight on 7th December.