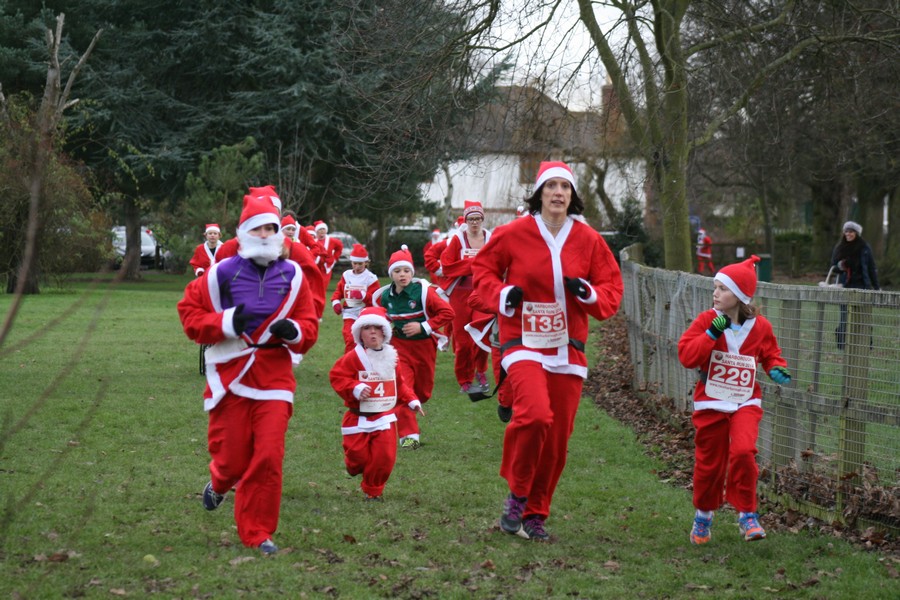 Hundreds turn up to see Harborough Santa Fun Run. Market Harborough’s first ever Santa Fun Run took place at Welland Park on Sunday (14th) and has been hailed as a great success by organisers, participants and spectators. The plan is that it will return again next Christmas. 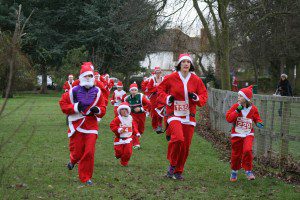 250 runners congregated outside the café, where they were entertained by the Ukulele Orchestra of Market Harborough whilst collecting their Santa costumes. Before the race, organisers judged ‘the best dressed dog’, with Spencer taking the prize. The race itself got underway at 2pm with Santas deciding on whether they would opt for the 2km or 5km course depending on how many mince pies they had eaten.

The Santas were given an extra incentive to catch the Christmas pudding, who set off a few seconds before the rest of the field.  Sadly the pudding (Dan Hallam) proved too fast for the field.

The Santa Run was sponsored by Snap Fitness and helped raise funds for local charities, including over £600 for The Squires Effect.

“Although most people in the park that afternoon were there to watch or take part in the run, we did see some rather baffled to see looking people not expecting to see 250 Santas dash past them as they went for a quiet stroll along the river” comments Amy Handford, one of the event organisers.

The race is the first of its kind in Market Harborough, following the success of Santa Runs throughout the county, including Lutterworth and Loughborough.

“We had so much fun and my little 3 year old loved taking part! Thanks so much to all the organisers and marshals for a brilliant event. We’re really chuffed to have this as a new annual fixture and look forward to it next December” commented one of the participants Sophie Alexander.