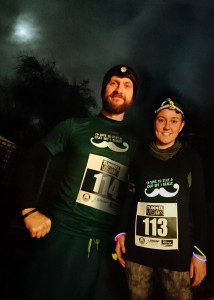 Harborough’s first ever night race launches in support of Movember

A new 5 mile night time run is taking place next month in Market Harborough to raise funds for Movember, the prostate and testicular cancer appeal.  The ‘Tunnel Vision Night Run’ follows the tracks of the Brampton Valley Way for a 5 mile race which incorporates the 420m tunnel at Great Oxenden.

The race takes place on Thursday 26th of November at 7.30pm. Runners will navigate their way through the dark night with head torches, running along the traffic free countryside track, however when they reach the 420 metre tunnel, they will find it fully lit.

The event is the latest is a series of sporting events created by Race Harborough. Over the past 2 years they have launched the Harborough Triathlon, Santa Run, Cycling Sportif, Harborough ½ Marathon & 10k.

Co-organiser Brian Corcoran comments “The route is a popular one for runners, but they will never have experienced it like this.  With hundreds of runners taking part and the tunnel under Great Oxenden lit up it will be a unique experience.” The event organisers were inspired by the ‘Moket Harborough’ campaign for prostate and testicular cancer appeal which has had such a high profile presence in the town over the last 3 years.

Money from each entrant will be automatically donated to the charity and runners are also encouraged to seek sponsorship for taking part in the 5 mile event. “The run is open to everybody over the age of 15.  We are particularly appealing to anybody who grows a moustache for Movember to take part,” adds Amy Kingston, also from Race Harborough. “As it’s towards the end of the month, it’s a great chance to show off your impressive upper lip – and there will be a prize on the night for the best moustache.”

For the many non-moustache owners who enter, stick on moustaches are encouraged. The event hopes to raise at least £600 for the Movember Foundation. Organisers are encouraging entries from all abilities, from club runners to those who will be entering a race for the first time. Entries must be made in advance via www.raceharborough.co.uk  Places are limited and will be allocated on a first come, first served basis. On the day entries may be available if the allocated 250 places do not sell out beforehand.