From humble beginning to the latest Race Harborough challenge

From humble beginnings to the latest Race Harborough challenge

The idea for the BBVW first surfaced several years ago when RH found out about a local annual charity fundraising event. It has taken until now for us to finally find a format that we were happy with but this piece by Olly describes how he got involved with the InDependent Diabetes Trust (IDDT) and why the charity means so much to him. We are delighted to support the charity and hope that you will be able to do so too.

The story behind the Battle of the Brampton Valley Way

I didn’t get running. I was playing football up to three times a week, including 90 minutes on a Sunday morning, so was relatively fit. It’s 2010. I tried running, just one mile down the Brampton Valley Way (BVW) and I was couldn’t go any further, I was shattered. How could someone run a marathon, 26 miles of this, surely that’s impossibl 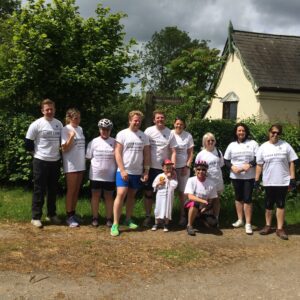 e? But what I didn’t understand is that when people say they are going for a run, what they actually mean is jog. I had been spiriting!

Fast forward to January 2014 and I was at the office of the InDependent Diabetes Trust (IDDT), a Northampton-based national charity. I had been working closely with the charity helping them to plan their twentieth anniversary year. Knowing that running would be a significant challenge for me, I said I would run from Market Harborough to Northampton along the BVW that June. And so, the 14-Mile Challenge was born.

It made sense for many reasons, at the time I lived very close to the Harborough end of the BVW and the charity is located in Northampton. Plus, I have always loved the BVW, having cycled along it many times as a child, growing up in the relatively remote village of Arthingworth it was our connection to Harborough.

My brother Benny had started running and told me about the Nike running app. Tracking my activities was a game changer, so was the realisation that I needed to slow down. If I was going to run 14 miles, I would need to change my mindset when it came to running. My training went well and on my fourth run I had ran 10 miles.

During the first year of the 14-Mile Challenge, it was just my brother and me. In 2015, there were 10 of us, only three runners but we had the addition of cyclists. It continued in 2016 along the same lines, but in 2017 I had a problem. I had ruptured my cruciate ligament in my left knee playing football, so unable to run I walked.

In 2018, six months on from my knee surgery I walked it again and again in 2019. We did also have runners, other walkers and cyclists. I was due to walk in 2020, but in keeping with the year, I was struck down with flu the day before so pulled out. I tested negative for coronavirus in case you’re asking.

Anyway, here’s the key part of the story, I took part in the first Race Harborough Tunnel Vision run in November 2016. This led to me having a chat and then a meeting with Brian and Kenny from Race Harborough getting them involved in, and expanding, the 14-Mile Challenge. Although there was no immediate collaboration, a seed was planted.

That seed has flowered and now we have the Battle of the Brampton Valley Way. Race Harborough is also choosing to support the IDDT with this event, a charity which provides vital independent support for people with diabetes, their parents and carers.

The BVW is a glorious pathway into the countryside, it is on our doorstep and it should be enjoyed. Get involved, take part, support the event.

This website uses cookies to improve your experience while you navigate through the website. Out of these, the cookies that are categorized as necessary are stored on your browser as they are essential for the working of basic functionalities of the website. We also use third-party cookies that help us analyze and understand how you use this website. These cookies will be stored in your browser only with your consent. You also have the option to opt-out of these cookies. But opting out of some of these cookies may affect your browsing experience.
Necessary Always Enabled

Any cookies that may not be particularly necessary for the website to function and is used specifically to collect user personal data via analytics, ads, other embedded contents are termed as non-necessary cookies. It is mandatory to procure user consent prior to running these cookies on your website.